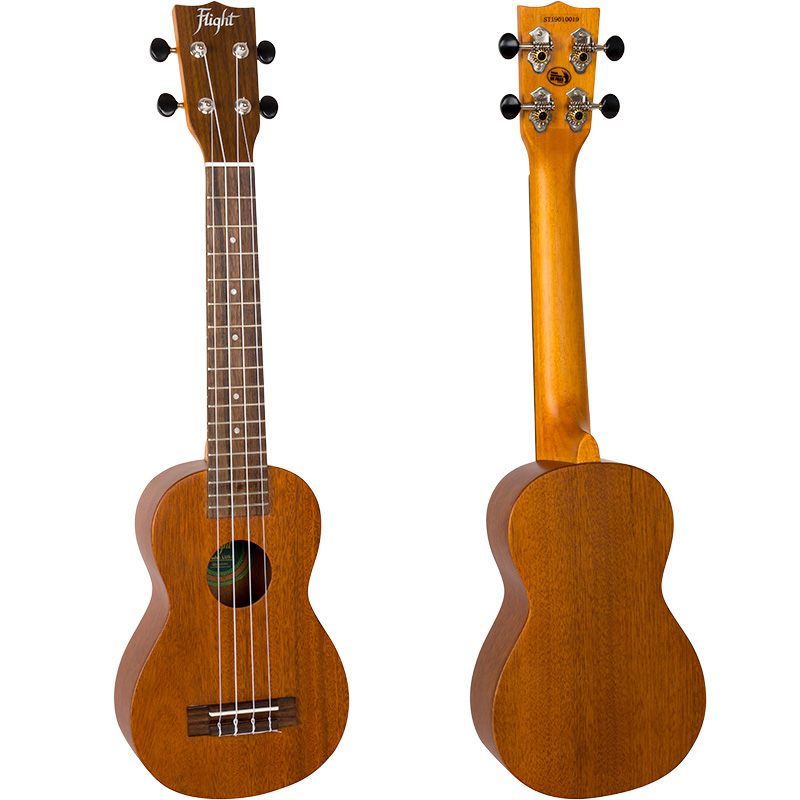 The Long Neck Soprano is an instrument that thinks outside the box. It creates opportunities for advance playing for the beginner and intermediate ukulele player in a unique way.  We’re certain the LUS-5 and TUSL are going to become favourites amongst our customers.

This unique configuration is not new idea, but neither is it a traditional model. So the common question that is likely to pass through a ukulele players head when seeing one for the first time will be “Why do I need this in my life?”

As you may know, there are various sizes of ukulele; the basic ones being soprano, concert, tenor and baritone. Many people, after trying these different sizes, tend to settle for one. It is no secret that the larger sized models are most popular among relatively new and intermediate players. Many find they just can’t get on with the size of the finger board of a soprano (I’ll touch on this in a bit).  But, interestingly (and this is purely anecdotal from various ukulele vendors) as people progress further, the lure of the soprano gets stronger and stronger. There’s a really good reason for this.

Most people, when they advance as players, get somewhat bored of the “plinky plonky” way of playing.  As you advance however, you’ll find that the magic of the uke lies not just in all those chords you’ve been learning to play but in what you do with your strumming or picking hand. The difference in a sound of a uke when you begin to master techniques such as the fan, split and triple stroke is vast, and it is arguably what makes the ukulele an instrument in its own right. The soprano is a stunning instrument to play when you finally master its percussive qualities. It’s lack of sustain and smaller fretboard will make you work harder but the pay off is sometimes greater than but always equal to that which can be obtained from the other sizes.

Now I am a bit of a traditionalist and I would argue that there is nothing you can do on a tenor that you can’t do on a soprano. But to be able to do that takes some dedication and perseverance over a fairly lengthy period of time.  Many people find that the fretboard on a soprano is just too challenging whilst they’re finding their feet. Here’s why.

If I had a dollar for everyone that has said to me, “I can’t play the soprano because the spaces between the frets are too thin” I’d be rolling in the money. The simple fact is that the challenge isn’t the space between the frets but the width of the nut or fretboard. Either way, many people find the soprano neck a struggle and often ditch the instrument for a tenor or concert. That is a huge shame because of the world of musical fulfillment they’re going to miss out on.

This is where the long neck soprano comes in. Now I’ll let you into a secret. The size of an instrument is generally classified by the scale length. That is the distance between the nut and the bridge. On a long neck soprano, the scale length is concert sized. That means you have all the benefits of a wider nut and generally more space for manoeuvring around the fret board. So, although, technically the LUS-5 is a concert sized uke, we recognise that it has a soprano sized body. The benefits of that is that you retain the percussive, sweet sound of a soprano whilst also enjoying a little more sustain and punch through the longer and higher tensioned strings. Don’t get me wrong, you can do a split stroke and such like on a concert, but the soprano sized body just lends itself perfectly to it.

Now of course, the benefits I’ve mentioned above, may be enough to sway a fair amount of people. In some way that’s a big thumbs up to the long neck soprano. But Flight have developed the TUSL and the LUS-5 not because it’s a great substitute for other sized fretboards or bodies. We believe the Long Neck Soprano has a sound and playability of its own. A versatility that can take you from that percussive syncopation in one moment to sustain filled, melodic fingerpicking in the next. The Long-neck is the classy 4×4 which can turn its hand to anything. Importantly it has a sound and depth of its own; different to the other more orthodox ukulele configurations. This instrument is so individually versatile that it may well find itself in pride of place as your main instrument for many years to come.