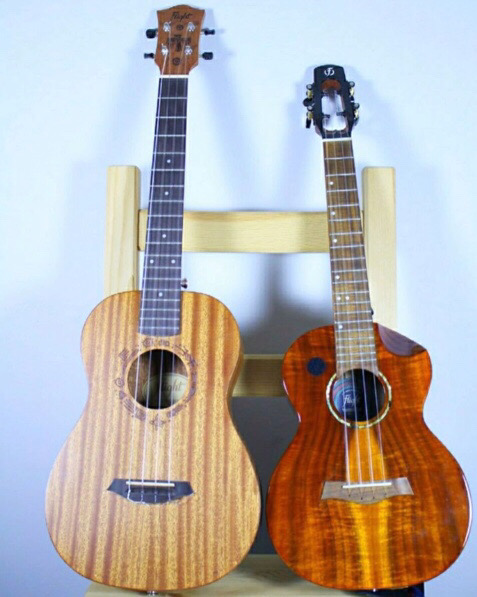 In this Flight Uke Tip, we will discuss tenor and baritone ukuleles.⁠
⁠
The tenor ukulele was a natural progression for the instrument—if you’re going to make a concert ukulele, why not make it a little larger? The first tenor ukuleles were introduced in the mid 1920s. While the tenor ukulele is larger than soprano and concert ukuleles, it is tuned the same and shares the same range. The tenor body creates a sound that tends to be louder and more complex than smaller ukuleles. The scale length of a tenor ukulele is around seventeen inches, and string tension will be noticeably higher on a tenor than on a concert or a soprano. There is a myth that professionals only play tenor ukuleles—but many professionals do play tenor because of its sound quality and volume, and because the highest frets are easier to play.⁠
⁠
Baritone ukuleles were introduced in the 1940s, much later than any of the other scale lengths. The baritone, due to its size, has a much deeper and fuller tone than other scales of the ukulele. In general, baritones have a scale length of nineteen to twenty inches. The baritone also uses different tuning than other ukuleles—DGBE—exactly like the top four strings of a guitar. This makes the baritone easier for guitarists to play, but the different tuning can be a real challenge for ukulele players who are used to ukuleles that are tuned GCEA. With its different tuning and larger size, the baritone ukulele has had a mixed reception in the ukulele world. There are fewer overall resources for the baritone, but on the bright side, baritones have become increasingly popular and there are more models available than ever before!⁠
⁠
In the long run, it doesn’t matter what scale you play, as long as you are happy playing it. Flight offers a wide variety of ukuleles to meet all of your ukulele needs, from soprano to ukulele bass. Check out the full range of instruments at flightmusic.com.

Monthly Flight Uke Tips are written by our friend Chris from Ukestuff.info.